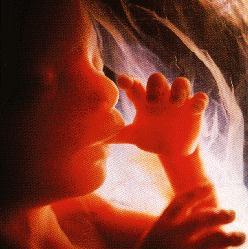 Every election cycle, the debate arises… “Candidate ‘A’ opposes abortion, but I disagree with his other positions. Candidate ‘B’ promotes access to and advocates a legal right to abortion, but I feel that he is more correct on the other issues of the day. Is it morally permissible for me to vote for Candidate ‘B’”? The question is often framed […]

END_OF_DOCUMENT_TOKEN_TO_BE_REPLACED

“Politicians who say they personally oppose abortion, but then don’t work to change the laws in order to protect unborn life, are examples of the most damaging kind of secularism.  Their faith life has virtually no effect on their public service.”   (Archbishop Chaput; Living the Catholic Faith, p.69) Print this entry

END_OF_DOCUMENT_TOKEN_TO_BE_REPLACED

On Sunday, as we were being bombarded with robo-calls, advertisements, television news segments and special programs focused on Tuesday’s elections, a significant commemoration quietly took place: the tenth anniversary of Pope John Paul II’s declaring St. Thomas More the patron of politicians and statesmen. As those who were elected on Tuesday change their focus from campaigning to preparing to serve […]