Looking for a good read? I recommend Brendan Hodge’s new work, If You Can Get It (Ignatius Press). If You Can Get It is a well written, engaging novel that intelligently explores living meaningfully in today’s superficial world. An educated Catholic friend recommended it to me. The title lodged Gershwin’s song in my head, so I picked up the book – and couldn’t put it down. 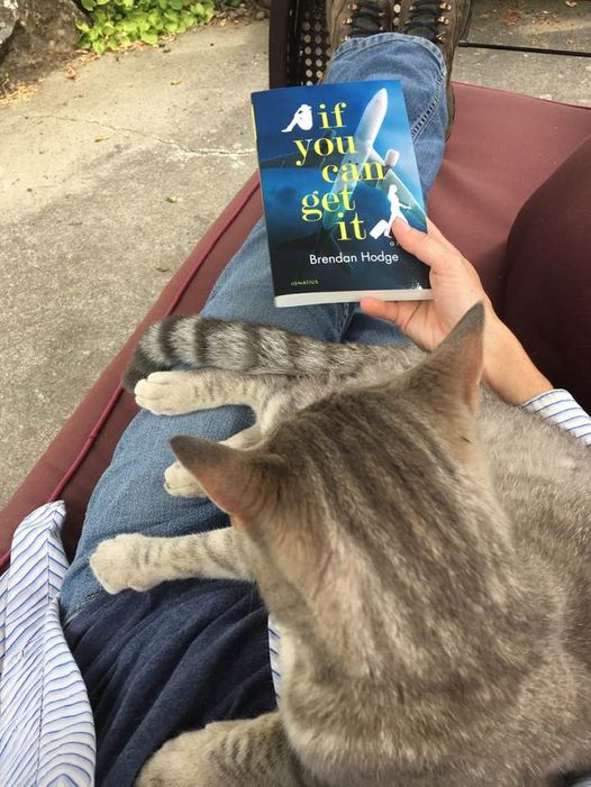 The Hallmark signature big-city-business-woman-learns-what-life-is-really-about theme is at play, and so is Frozen’s sisters-with-clashing-personalities-find-their-gifts-and-become-better-versions-of-themselves theme. But there’s no schmaltzy romance, first snow on Christmas Eve in the town square, magic ice palace, comic-relief snowman, nor Disney soundtrack. Only that Gershwin tune running through your head.

Successful, thirty-something business woman, Jen, is climbing the corporate ladder, the next rung just within her grasp. Her Stanford MBA and hard work have earned her everything she wanted – a condo in the Bay Area, a BMW, an impressive wardrobe. Jen knows how to get the things she desires but she’s so busy focusing on success at work, she hardly notices how empty her life is.

Katie, ten years younger, has just graduated from college with a degree in Comparative Religion and no idea what to do next. What she does know is that she can’t possibly move back in with mom and dad, so she deposits herself, uninvited, into her sister’s well-ordered life. It’s a reluctant, but accepting odd couple. They’re sisters, after all.

Jen’s career takes several unexpected detours and the careening journey provides rollicking reading. Katie’s “career” dead-ends at Starbuck’s before it begins through a lack of direction and bad choices – but she never really had her mind on corporate America anyway. Perhaps she has chosen the better portion.

Jen and Katie’s relationship is not tumultuous, sparing the reader the melodrama that might be expected in a story described as featuring “two very different sisters.” Jen is really the focus, providing the most entertaining situations as well as the interior awakening Hodge handles in a natural way, which largely avoids the annoying didacticism than might have been employed by a less skilled writer.

What’s really remarkable is that this book about women is written by a man – and, as a female reader, I never felt like smacking him. In the author bio, Brendan Hodge is described as the father of seven. I’d be willing to bet at least a few are girls. And he’s likely to have a few sisters, too. From clothing to tempers, he obviously has easy access to first hand research opportunities and fact checkers. Who knew I’d learn what “kitten heels” are from a man?

Hodge’s knowledge of his subject encompasses even more than sisters and their wardrobes. He has a good handle on the workings of Chinese manufacturing, the tech world, the very latest business jargon. Had I not just heard a young man answer my inquiry about his job search by saying he had not yet “found a role,” I would have thought Hodge’s dialog to be a mere pastiche on corporate speak. He certainly highlights the superficiality of the world of getting ahead.

It is in the final third of the book that important new characters and ideas enter. Through the handyman, Paul, engaged by Jen and Katie for repairs to the historic mid-western house they move into, they’re introduced to a life flourishing with meaning and purpose. I recognized Paul from my own parish – there are at least six of him there: bow tie, beard, suspenders.

Paul lives at a slower pace than Jen is used to, directly connected to things with meaning. His Catholic Faith directs his actions. He owns a growing farm, restores old houses, makes music on his guitar, and prays. Paul is striving to live a life where cult (religion) and culture intersect. He cultivates the earth; he contributes to the culture of beauty through building and music; he worships God through liturgy. His life is imbued with meaning. He is at peace. He is not always striving to achieve.

Though they grew up nominally Catholic, this is all new to Jen and Katie. They’re introduced to ideas they never knew that came from the “religion of rules and regulations” their family had never really embraced. We hear of Wendell Barry’s agrarianism, Theology of the Body, the Principle of Subsidiarity, the beauty of the Liturgy. But, this is not a text book and none of this is put down in a lecture by character or narrator. It just comes out in the conversation and actions of the characters, intriguingly, sparking an interest in more.

If your interest is sparked, pick up a copy at your local bookstore or the Ignatius Press website. It’s a nice book, “If You Can Get It,” and you can get it if you try!