Passion Sunday — The Sunday before Easter, Palm Sunday, is observed by virtually all Christians. But for the Roman Catholic Church, it is also Passion Sunday during which all stand for readings and meditations from the passion account. The feast has a bittersweet taste. Though it celebrates the King’s triumphal entry into Jerusalem amidst hosannas, the parade leads straight to the Lord Jesus’ suffering and death on Calvary.

Passion Sunday / Palm Sunday. We now come to the Sunday with a split personality. It starts with an upbeat gospel recounting Jesus’ triumphal entry into Jerusalem. It is a festive affair, complete with a parade route strewn with palm branches instead of ticker tape. But we quickly progress to the stark reading of Jesus’ passion, bearable only because we already know its happy ending. Mel Gibson’s film did us a favor in reminding us how shockingly brutal the whole business really was.

Two names for the same day: Palm Sunday and Passion Sunday. I propose a third name: Fickle Sunday. For the same crowd that was cheering during the parade was jeering a few days later. They’d been wowed by his sermons, fed with loaves and fishes, healed of their diseases, delivered of their demons. But as soon as the tide began to turn, so did they. Their cries of “Hosanna” turned to shouts of a very different kind: “Crucify him!” 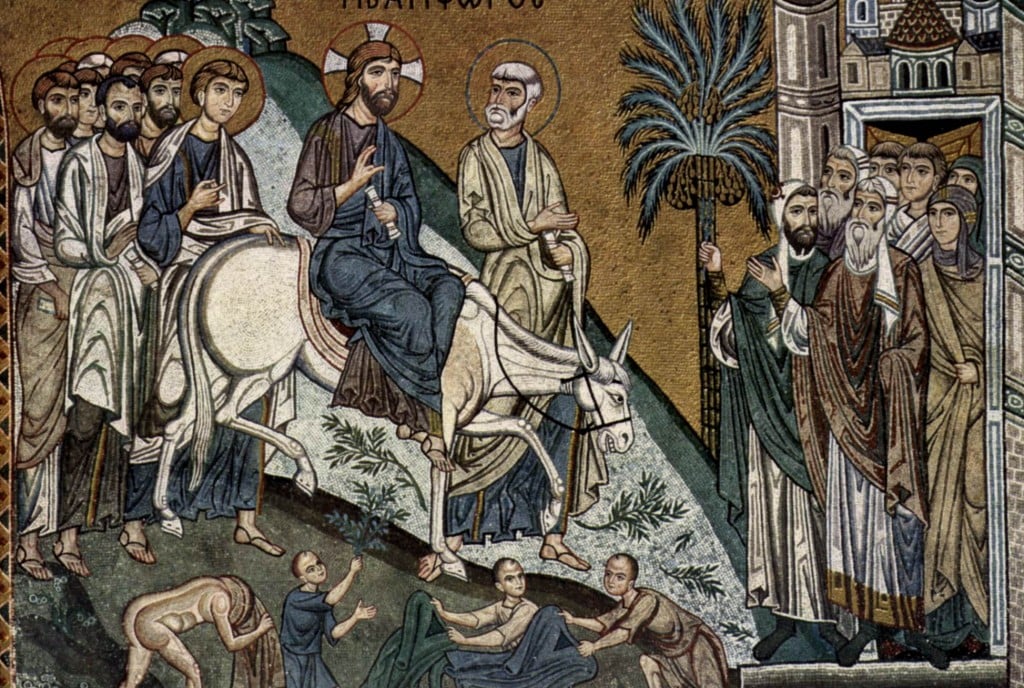 Of course, he was not surprised in the least. The gospels tell us that he knew the human mind and heart all too well. He was not fooled by all the acclamations and fanfare. Flattery could not swell his head. He had no illusions of grandeur or ambition for worldly glory. In fact, Paul tells us that He had willingly emptied Himself of heavenly glory in pursuit of His true passion – His Fathers will and our salvation.

Jesus “set his face like flint.” He was on a mission and nothing would deter him. He barreled through barriers that usually stop us dead in our tracks–fear of ridicule, fear of suffering, abandonment by our closest companions. He was willing to endure the sting of sin to blot out sin, and was eager to face death in order to overcome it.

He did indeed have a “well-trained tongue.” His words had mesmerized the crowds, intrigued Herod and even made Pilate stop and think.

But now his lips are strangely silent. All the gospels point out that he said very little during his passion, collecting only seven brief statements from the cross. Maybe this was to fulfill the Scripture that said “like a lamb led to the slaughter or a sheep before the shearers, he was silent and opened not his mouth” (Isaiah 53: 7b).

Actually, everything that happened in these fateful hours fulfilled Scripture. Isaiah 50 had foretold the beating and mockery. Psalm 22 lays it all out hundreds of years before it happens: his thirst, the piercing of his hands and feet by Gentiles (called “dogs” by the Jews), and the casting of lots for his clothing. The opening line of this psalm happens to be “My God, my God, why have you forsaken me?” Could it be that the Lord uttered this phrase to remind us that this was all in the plan?

So the virtual silence of his well-trained tongue was to fulfill Scripture. But there was another reason for his silence. Though Jesus was destined to preach on Good Friday, the message was not to be delivered in words. The language of this sermon was to be “body language.” Good Friday, according to Jewish reckoning, actually began at sundown on Holy Thursday. So on the beginning of his final day, Jesus gave us the verbal caption of his last and greatest sermon: “This is my body, given for you; this is my blood, which is poured out for you.”

“I love you” is not so much something you say as something you demonstrate. Diamonds may be a moving testimony to love, but the laying down of one’s life is even more compelling. And though this life is human and therefore vulnerable, it is also divine and therefore infinite in value. A gift so valuable that it outweighs every offense committed from the dawn of time till the end of the world. A gift so powerful that it melts hearts, opens the barred gates of paradise, and makes all things new.