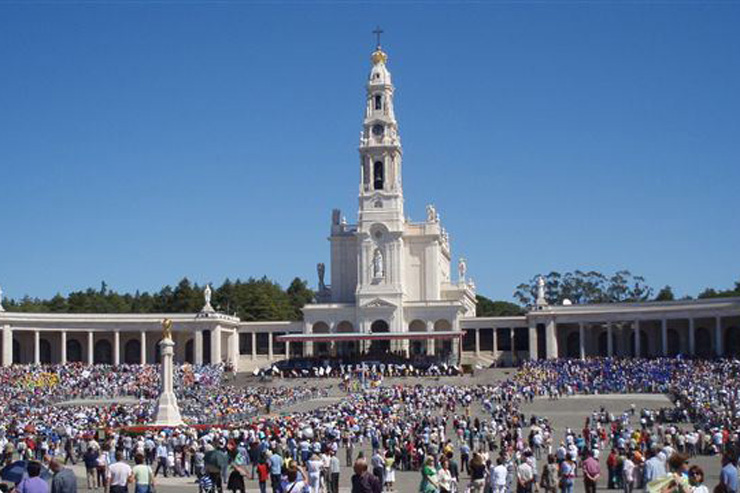 Santuário de Fátima
Bascilica of Our Lady of the Rosary

Next week [May 12-13] Pope Francis will travel to Fatima to celebrate the centenary of Mary’s apparitions to the three shepherd children in the Cova da Iria. There’s every reason to think that Pope Francis will be at his most joyful because he will have a chance there to do and speak about several things he cherishes most.

He’ll be able to express his love for the Blessed Virgin, which he does routinely at St. Mary Major Basilica before and in thanksgiving after every foreign trip. He’ll be able to reiterate for us the importance of prayer and make a strong invitation for us anew to pray the Rosary, as he’s done repeatedly in Angelus Meditations in St. Peter’s Square. He’ll have the opportunity to repeat his calls for prayer and work for peace, echoing Mary’s call to and through the pastorinhos. He’ll have the chance to focus on the importance of consecration to Mary, something he mentioned throughout the Year of Consecrated Life held two years ago. And in canonizing Francisco and Jacinta Marto, who will become the two youngest non-martyred saints in Church history, he will be able to reinforce themes he articulates each year on World Youth Day with regard to the important role of young people in God’s plans and how all people, no matter how the young, are called to holiness.

It will be the sixth visit of a successor of St. Peter to Fatima. Reflecting on the first five is one of the best preparations to get us ready for the sixth.

The first took place on May 13, 1967, the fiftieth anniversary of the first apparition, when Blessed Paul VI, surrounded by one million faithful in front of the Basilica and two millions on the streets, made a five-and-a-half hour visit before returning to Rome. He came to celebrate the Golden Jubilee of Mary’s appearances and Silver Jubilee of Pope Pius XII’s consecration of the world to Mary’s Immaculate Heart. He said he was there to pray specifically for two intentions: for peace and renewal in the Church, after some of the ecclesial craziness and chaos that followed the Second Vatican Council that would only worsen after the publication of Humanae Vitae the following year; and for peace in the world, that through our prayer and penance according to Mary’s direction, we would see triumph of love and victory of peace.

When he returned to St. Peter’s Square that same night, another vast crowd was present to welcome him, and he released an apostolic exhortation entitled “The Great Sign” (Signum Magnum). In it he sought to help everyone appreciate the link between Mary’s spiritual motherhood, shown in her maternal intercession in Fatima, and our duty to venerate her because of her indissoluble tie to her Son, our Redeemer. In contrast to the defective novel theologies that were trying to downplay Marian devotion as somehow unbiblical, the Pope emphasized how Mary precisely helps us to receive and live the Word of God. Mary, he underlined, is a model of virtue and true devotion to her, and consecration to her Immaculate Heart, reflects those Christian virtues and enfleshes God’s word.

His first pilgrimage happened on the first anniversary of Mehmet Ali Agca’s attempt on his life and he pondered the “mysterious coincidence” that it occurred on Mary’s feast day, knowing as he did the content of the then-still-secret third part of the Message of Fatima, describing that a bishop in white would be shot and killed. John Paul II believed that Mary’s hand and Jacinta’s prayers and sacrifices for the “poor holy father” saved his life from certain death after Agca’s bullet pierced five vital organs. In his visit, he sought to help the Church and world grasp the “basic nucleus” of the Fatima message, Mary’s solicitous, strong, decisive, loving, maternal call to repentance through prayer — especially of the Rosary — for the conversion and salvation of sinners. Consecrating ourselves to Mary, he stressed, means to accept her help and prayers as we entrust ourselves to the pierced heart of her Son. In the 65 years since Mary appeared, he said with concern, rather than heeding Mary’s summons, many have gone in the opposite direction, allowing sin to make a home in their hearts and world. For that reason, Mary’s call to conversion, he emphasized, was even “more relevant and urgent” than in 1917.

In 1991, he called Fatima a constant reference point for living the Gospel. He thanked Mary for “having guided with maternal tenderness peoples to freedom,” a reference to the liberation of those in the former Soviet bloc from communism after Russia and the world were consecrated to her. He said that Mary’s “palpable, penetrating call” is for us to adjust ourselves to God’s ways so that she may give us and the world Christ, her Son, our peace. He exhorted all of us to “persevere in devotion to Mary.”

In the Great Jubilee of 2000, St. John Paul came to beatify Francisco and Jacinta in the presence of their cousin and fellow seer, now Servant of God Sr. Lucia dos Santos. He focused on the totality with which they responded to the Mother of God, offering themselves as victims of reparation to console Jesus and atone for sins. He urged us to follow them in enrolling in Mary’s “school,” the sacred academy that helped them become “saints so quickly.”

The fifth Papal visit was in 2010, when Pope Benedict came as a pilgrim to initiate seven years of preparation for the centenary. Fatima, he said, isn’t a footnote in history but rather has “imposed itself on the Church.” Its forceful message involves not merely “particular devotions,” but a “fundamental response” that involves ongoing conversion, penance, prayer, faith, hope and charity. Mary, he stressed, wants to help the Church “relearn” penance, purification, forgiveness and justice.

He added that “Fatima and the Rosary are practically synonymous,” and urged us in praying the Rosary to imitate the “amazing” entrustment of the shepherd children and like them allow the mysteries of Christ attract us by fixing the gaze of our hearts on Jesus like Mary did.

“In seven years you will return here to celebrate the centenary of the first visit made by the Lady ‘come from heaven,’” he told us in words that will be fulfilled in a week, and he urged us not to think that “Fatima’s prophetic mission is complete,” but to live these years of preparation by loving Jesus like the shepherds and hastening through Marian consecration the fulfillment of the prophecy of the triumph of Mary’s immaculate heart.

Speaking about his pilgrimage six days later during his general audience in Rome, Pope Benedict commented on the connection between Fatima and heaven. “Fatima shows us,” he said, that “earth is a place where we make pilgrimage to our definitive homeland and we need a mother to guide us.

As Pope Francis and the Church throughout the world makes a physical or spiritual journey to Fatima next Saturday, we turn together to that guiding Mother and ask her not only to help us imitate the docility and devotion of Francisco and Jacinta, but to guide us maternally to the fulfillment of that pilgrimage where we hope to enjoy åher, and their, and God’s loving friendship for ever.

This article originally appeared in The Anchor, the weekly newspaper of the Diocese of Fall River, Mass, on May 5, 2017 and appears here with permission of the author.