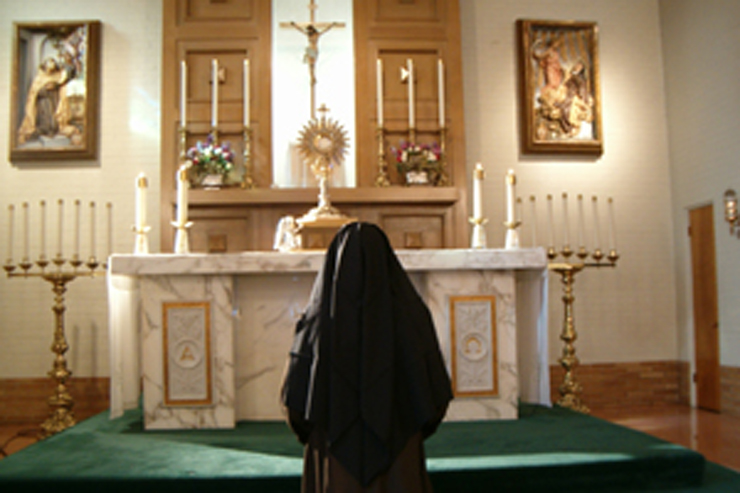 Photography © by Carmelite Sisters of the Sacred Heart of Los Angeles

Such joy! A baby is born. So innocent. So pure. So new.

Parents possess a most singular power and gift, one that should not be overlooked or understated, the gift of naming another human person, their child. At the very beginning of the Catholic Baptism ceremony, the priest asks, “What name do you give to your child?” The answer is said reverently, joyfully, and humbly and pridefully all in the same breath.

The parents “give” their child a name. The word “give” means to make a present of, to grant or bestow by formal action, or to commit to another as a trust or responsibility.

In Genesis we read, “Out of the ground the LORD God formed every beast of the field and every bird of the sky, and brought them to the man to see what he would call them; and whatever the man called a living creature, that was its name. The man gave names to all the cattle, and to the birds of the sky, and to every beast of the field” (Genesis 2: 19-20).

This giving of a name implies authority and power. It is done actively. The receiving of the name implies dependence and humility. It is received.

Just so, our parents named us. Each name is a treasure to delight in, a mystery to unravel, a teaching to be learned, and a journey to be taken. I don’t think there is anything more personal, more meaningful, and more poignant with significance to each one of us as the name given us by our beloved parents. Isn’t it so very easy to envision our parents as they thought about us before we were born, as they meditated on our names, had discussions and looked up meanings and symbols of and finally chose the special name for their beloved child, the fruit of their love?

Then what are we to make of those times in scripture when God changes someone’s name? Abram became Abraham; Jacob became Israel; Cephas became Peter; Saul became Paul. There is something very important happening when someone is given a new name, not by natural parents, but by God.

In thinking about this, we are definitely entering new territory. We are moving from the natural to the supernatural in a direct intervention by God. The new name Abraham means “father of a multitude” which he certainly became! Peter was called a “rock” which is what Peter means, and Christ gave Peter the keys. He was put in charge.

The same kind of thing happens in the religious life. We receive a new name. Some of us ask for a certain name and some of us don’t. There are those who get the name they asked for and there are others who don’t. That, too, is a mystery.

When I received the name of Sister Timothy Marie of Carmel, I did not ask for it, as I thought I’d much prefer just being given one. Now, over fifty years later, I still am able to think about this name change and learn something new from it.

I must admit that my family members still call me very often by my baptismal name. Others don’t even know my baptismal name; they only know me as Sister Timothy Marie of Carmel. As I have learned more about St. Timothy and Our Lady (Marie) and Carmel (Carmelite Spirituality) I have come to an amazing conclusion—that there really is something to the name change. It’s hard to put into words, but it is linked to, in my case for example, my God-given mission in this world.

Various insights into my name have come to me over the years. At first I may not understand, yet as time passes, they hold true. They help me as I strive to become the best “me” I can.

After entering the consecrated life, in due time, each Sister receives her new name. It is a cause for rejoicing. It is an outward sign of her new life. It is charged with meaning and potential.

Just as God gave man dominion over the birds of the air and the fish of the sea and empowered him to name them, so Our Lord, in His love and power, names us with “a new name” as we enter the consecrated life.

by Sister Timothy Marie O.C.D.
Carmelite Sisters of the Most Sacred Heart of Los Angeles