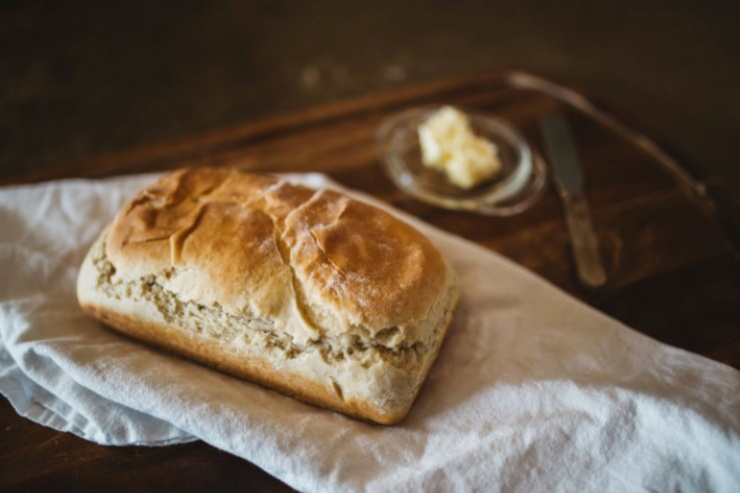 When I used to work at the St. Paul Center, the staff would often toss around a question of the day – one of those open-ended, thought-provoking questions that spur conversation.  One of my favorites involved traveling in a spaceship with a fictional character.  One of the classic ones inquires about eating dinner with historical character.  My list is a pretty long one, but this week I added the widow of Zarephath.  We heard the story last week during the first reading on Sunday (32nd Sunday of Ordinary Time, Year B) and I’ve been thinking about the episode for the last few days.  I have some questions I’d like to ask her over dinner.  (It would probably be polite to bring my own cake.)

The story is found in 1 Kings 17, when the land is under a severe drought because of the word of Elijah. He is told by the Lord to go to Zarephath, where a widow will feed him.  When Elijah calls out to the widow, first for water and then for bread, she explains that she is almost out of oil and flour, and she was just about to go make dinner for herself and her son. After eating that, they will prepare to starve to death.

“Just now I was collecting a couple of sticks, to go in and prepare something for myself and my son;
when we have eaten it, we shall die.”

Elijah assures her that she can do that, but first she should go make him a little cake.  Just when she’s probably wondering at the nerve of this prophet, he tells her:

“For the LORD, the God of Israel, says, ‘The jar of flour shall not go empty, nor the jug of oil run dry, until the day when the LORD sends rain upon the earth.'”

There’s a happy ending, of course, and we hear that the widow’s flour and oil did not run dry, and she was able to feed her son and Elijah as long as the drought continued.  (And don’t worry- Elijah earns his keep.  A few verses later he raises her son from the dead.)

I remember hearing this story when I was younger, and I was intrigued by what might have happened during the time it took for the widow to leave Elijah and go make that cake.  I’m not sure why I was curious about it, but it captured my attention.   She specifically says she doesn’t have anything baked, so did Eljiah just hang out by the city walls and wait for her to make the cake and come back and bring it to him?  I was even more intrigued by the gap of time in the story of Abraham and his visitors in Genesis 18.  They had come to tell him Sarah would conceive a child, and Abraham runs to kill a calf and have a feast.  How long would that have taken to do?  What did they do while they waited, play cards?

Now that I have grown up, I’m much more fascinated by the gap of time between the story of that first cake and the end of the drought.

We hear of the widow’s trust and faith and her daily reward.  But what did every day look like?

I don’t think she was given a year supply of oil and flour the instant Elijah prophesied of the miracle.  She returned to her kitchen and made that cake for Elijah in faith.  The next day, she was able to make another cake in faith.  If I had to hazard a guess, every day she had to face that almost-empty jug of oil.  Every day required faith.

We see a similar occasion of faith with the manna in the wilderness.  God told the people to gather what they needed for that day – no more.  When the people disobeyed and gathered more than they needed, the manna spoiled.  They needed to learn to have trust in their Father, who wasn’t going to let them go hungry. He would give them their daily bread.

Was there a day that the widow faced her small supply of flour and worried this would be the day it would run out?  Were there moments when she wondered what the following day would look like?  We hear of her great faith, but does that mean that every day trust came easily?

In the pursuit of holiness, I think we can get too distracted by the grand manifestations of heroic virtue.  We read the lives of the saints and are captivated by the martyrs and the miracles.  Perhaps without realizing it, we end up separating the saints from ourselves—because after all, when was the last time we were given the opportunity to die for our faith, or to see our guardian angel, or to preach a homily that spurred thousands of conversions?

With the gift of hindsight, we even see the “ordinary” saints as extraordinary—St. Gianna giving her life for her daughter or St. Therese suffering in silence.  When we can see their entire life with one look, we see the greatness without the ordinariness.  When we don’t think about their everyday lives, their holiness can just seem daunting.  What about me? Am I really called to the same level of holiness?

That’s why I’d like to chat with the widow of Zarephath.  Every morning when she looked into the oil jug, I doubt she was thinking, “And here I am, virtuously sacrificing this little bit of oil in faith! This is how I’m going to be remembered! As that woman who trusted and had great faith!”  It’s far more likely that she was having similar thoughts that I would have. “Here we go again.  When is this drought going to be over?  I only have this little bit of oil. What if today is the day it runs out?  What if I give my last bit away and I have nothing left?”  Then, setting aside her worries, she stepped out in faith. Every day.

Nothing glamorous.  Just a choice, every day, to do what we should do.  One little step, one little reward.  In the end, it looks magnificent.  But today, it looks pretty ordinary.