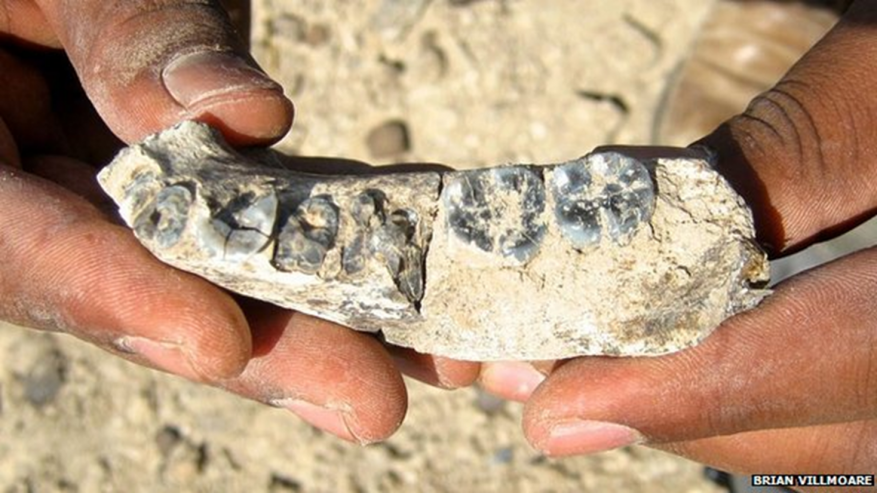 Last week, Professor Brian Villmoare’s team at the University of Nevada Las Vegas reported in Science the discovery and analysis of a fossil in Ethiopia, the partial lower jaw of what is thought to be the oldest known member of the genus Homo. The “hominin mandible with teeth” is identified as the left side of an adult jaw with partial and complete canine crowns and roots, both premolars, and all three molars. The specimen dates to about 2.8 million years ago.

This discovery is significant for three reasons:

1) It is about 400,000 years older than the other fossil evidence of the genus Homo, suggesting that the human family emerged earlier than previously thought.

2) Based on a careful study of the traits, it appears to be a different species, a transitional form between the genus Australopithecus (to which the 3.2 million-year-old hominin discovered in the same area in 1974, known as “Lucy,” belongs) and the genus Homo.

3) The earlier appearance has implications for hypotheses that humans evolved in response to a global climate change that shifted the African terrain to more open grassland with fewer trees, i.e. they evolved to walk more than climb.

Pallab Ghosh, the Science correspondent for BBC News reported about this discovery “‘First Human’ discovered in Ethiopia,” which might be confusing if not correctly understood. The scientific paper by VIllmoare’s team is titled, “Early Homo at 2.8 Ma (million years ago) . . .” not ‘first human’ although such language is not uncommon. Ghosh also wrote in the BBC article that the evolution of various early Homo lineages is “as if nature was experimenting with different versions of the same evolutionary configuration until one succeeded.” Professor Chris Stringer, an anthropologist at the Natural History Museum in London was quoted as saying, “These new studies challenge us to consider the very definition of what it is to be human.” This discovery and these statements need to be understood in their scientific context.

The Catholic Church does not reject evolutionary theory, including the scientific discoveries of human evolution. Theologians consider these findings in the light of faith. In fact, Professor Yves Coppens, the anthropologist who led the 1974 expedition credited with the discovery of Australopithecus afarensis in Ethiopia known as “Lucy,” was named an Ordinary Member of the Pontifical Academy of Sciences by Pope Francis last year. Professor Coppens was invited to present his findings on hominid evolution and the emergence of the genus Homo to the Academy.

The Academy knows it is beneficial to follow the work of researchers, and the Academy knows it is possible to follow research without denying that God created everything, that the human being is a special creation made in the image and likeness of God, that the human family is united, that God creates the human soul immediately out of nothing, and without denying the Fall and Original Sin. Those dogmas do not belong to the realm of physical or biological science.

What does belong to the realm of evolutionary biology and anthropology is the study of the human body and human populations. If a researcher discovers an ancient jaw with human teeth, it is absolutely reasonable for a team to examine, note, catalog, identify, and compare every possible detail of that fossil with previously discovered fossils to try to piece the new finding into the developing story of human origins. To throw the fossil down and go home? That would be unreasonable.

The language in the Science paper is exhaustively specific and precisely technical, as is typical. These details include radiometric dating, comparisons of the cross sections of the bone with other fossils, analysis of the way the teeth are worn to indicate range of motion and eating habits, and cataloging of the size of the teeth. A lot can be deduced from a jawbone, and it is not just any jawbone. It is 2.8 million years old with similarities in between older known primates and later ones. The understanding of the genus Homo in the time between 2.0 and 3.0 million years ago has been limited because the fossil record in this time frame is limited. To say this new discovery is an important piece of the puzzle is an understatement.

No, no one is suggesting that. The use of the term “first human” does not refer to the discovery of a single first individual because evolution deals with populations, not individuals, in time spans of hundreds of thousands of years. Speaking of evolution in terms of individual lifetimes is like trying to pick up a grain of sand with a bulldozer; it is the wrong tool. The use of the term “first human” only refers to the discovery of the earliest known specimen of a possibly new species from the genus Homo. It is worth noting that in his address to the Pontifical Academy of Sciences Professor Coppens also used the term “first Man” to refer to the first species of the genus Homo.

Anthropologists speak in terms of “genus Homo” because the human fossil record is cataloged by species in that genus. It is thought that lineages evolved in response to changing environments and spread out across larger and larger territory. As we know today, all of the other species in the genus Homo are extinct except ours. Since about 10,000 years ago, there has only been one human species and subspecies, our own, Homo sapiens sapiens. Our species appears to have moved to Europe about 50,000 years ago, which means our species most likely lived at the same time as other species.

Saying that “nature was experimenting with different versions of the same evolutionary configuration until one succeeded” may sound as if it is being argued that nature is personified, but in this context such language only refers to the physical and biological laws of nature, somewhat like saying tributaries experimented with different paths before finding their way to the ocean. The reference is to genetic variation and natural selection. The genetic makeup and physiological expression of the early human populations responded differently to changing climates. There is no need to read any more into the statement than that.

There have been many kinds of hominin and mammalian fossils found in the region of Africa where both “Lucy” and this jawbone were found that date between 2 million and 3 million years ago. Lots of these animals were suited for terrain composed of wood patches and grasslands. Paleoclimatologists have argued that climate change sparked the evolutionary burst. Although it is premature for the new discovery to be named a new species, a burst of Homo species might fit with the developing theory.

What It Is To Be Human?

When a scientist says, as Professor Stringer did, that these studies “challenge us to consider the very definition of what it is to be human,” the reference is not the same kind of challenge as a Catholic philosopher or theologian might make. A Catholic philosopher or theologian might talk about human nature in terms of the powers of the soul, such as intellect and free will, and the practice of virtue. An anthropologist asks “what it is to be human” in terms of the evolution of human populations. Evolutionary theory includes ideas about how the brain evolved and how the human ability to innovate emerged. As these discoveries become better understood in the light of new discoveries, the research may indeed complement the developments of philosophy and theology by shedding more light on what it means to have a human body. For Catholics, to be human means to be both body and soul united.

What Do We Make of These Studies?

Pope Emeritus Benedict XVI called creation and evolution “complementary realities.” The reality of the physical realm and the reality of the spiritual realm complement (go together) each other so that we can further our understanding of universal reality. There is no reason to be alarmed at these discoveries, nor is there any reason to be overly suspicious of the language that scientists use. The right approach is to seek to understand scientists as scientists.

Researchers readily admit that discoveries like this lead to more questions than answers, and that is good in science. Even though these findings have implications for the development of theological understanding, this particular finding adds nothing newly surprising. The idea that there were several species of the genus Homo is over 100 years old.

And when anthropology (or any other science) poses new questions, it is the work of trained theologians and exegetes to propose new ways to understand the science in the light of faith, which is why the Pontifical Academy of Science invites scientists to present their work. Theologians and philosophers go much slower than science though. It is futile to try to extract metaphysical conclusions from incomplete scientific theories.

Ultimately it is the role of the Magisterium of the Catholic Church to declare whether or not deeper understanding of Divine Revelation has been gained. The lay apologist’s job is to follow the developments of scholars and to communicate them, or to pursue a path of study to become a scientist, philosopher, or theologian if one is so inclined to contribute to new knowledge.

Make no mistake, there are ongoing challenges posed by anthropology to the understanding of philosophy and theology. Were other species of the genus Homo also rational? What was the first population of rational humans? How do we know if a species was rational? If the first humans were a population instead of a pair, as biology suggests, then how do we understand Genesis? How much of Genesis is meant to be interpreted literally? Did multiple populations of the genus Homo co-exist? And did they mate? (Evidence suggests some did.) If we evolved, then in what ways are we still evolving? Can we guide our own evolution? The answers to these questions simply are not all clear at this time, which is also kind of what it means to be . . . human.

We live on a temporal trajectory, and a very short one in the span of human existence. Just as our ancestors did not, neither will we find all the answers to all the questions, and neither will our descendants. If the science interests you, then follow the scholarship or even better, become a scholar. But—and this is monumentally important—do not read a single scientific paper about a single discovery as anything more than a discursive step to further understanding. The language in scientific papers is careful and provisional for just that reason, only offering conclusions as the basis for further work because scientists know their work is never done. It is, after all, this provisional nature that makes science so exciting to rational biological creatures such as ourselves.