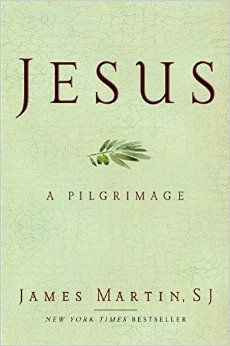 When I first heard about Fr. James Martin’s new book, Jesus: A Pilgrimage, I’ll be honest: I wasn’t interested. It wasn’t until I became part of the posting team for the virtual book club at CatholicMom.com that I really committed to it.

And the reason I jumped in on that was because of someone else’s passion to read this book as part of a virtual book club.

So often, that’s the way it is with me. I turn my nose up at something that’s good–maybe even good for me–because of some excuse (or excuses) I have.

I already have a huge reading stack.

I don’t really want to read about Jesus or a pilgrimage.

It’ll still be around when I have time to read it.

As it turns out, this book was just the thing for me over the course of the last three-ish months. I *was* just going to read the book one chapter at a time, but I found that it was just too good a book to put down. So, instead, I read it straight through and then revisited parts of it as I had to write about my chapters and to follow the conversation.

I never wanted to go to the Holy Land. In fact, until I became Catholic in 2001, I never really wanted to travel outside the United States, much less be a pilgrim.

So it was with great interest at the beginning of this book, which at the beginning I considered rather monolithic in length (avid reader though I am), that I read that Fr. Martin didn’t really want to go to the Holy Land either.

He was convinced by a number of reasons and circumstances, and the first chapter really made me consider the doubts I too entertain about the Holy Land (they’re different than his and stem mostly from the fact that I just never really cared to go).

Look up “awesome” in your thesaurus and go ahead and just apply all the synonyms here. This book is all that, with whipped cream on top, a side of chocolate, and a hearty pot of coffee. It’s not only a book I wholeheartedly and unreservedly recommend, but  it’s one that I will probably not ever at all lend.

Nope. Can’t do it. Sharing’s not an option with a book that could turn into a yearly read…

Don’t miss this book. You deserve it, especially if you’ve ever loved Jesus. This book will make you look at him more clearly, appreciate him more authentically, and find your faith more tangibly.