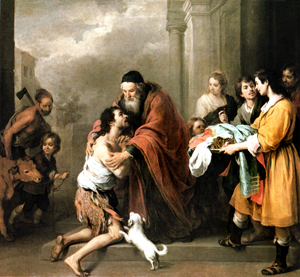 Return of the Prodigal Son – by Murillo

We can help those who are undergoing purgation with our prayers.  I can’t explain how, but I can say that we are instructed in Scripture to pray for one another. We are taught that the prayers of a righteous man availeth much! In some way, God applies the prayers we offer for the faithfully departed to their cleansing. This has been the practice and belief of the Church from the very beginning. There is so much more to be learned about the effects of our prayers for the dead. Suffice it to say that what we do can be secondary causes of of things that happen.  This is in part what it means to conformed to the will of God. Good things can happen for others as a result of our prayer, otherwise He would not have said so. So, in closing, develop the habit to pray for the faithfully departed as part of your daily prayers. The greatest gift one can give to their deceased loved ones is to have a Mass offered for them. If they are not in need, God will see to it that the graces are applied to those who are.

Into the Deep by Deacon Mike Bickerstaff is a regular feature of the The Integrated Catholic Life™ and usually appears on Sundays and occasionally on Tuesdays or Wednesdays.