Be Thankful in All Things 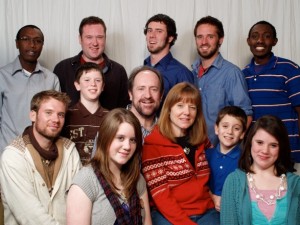 “In everything give thanks; for this is God’s will for you in Christ Jesus.” (1 Thessalonians 5:18)

It’s Thanksgiving.  Time to go around the dinner table and say what you are thankful for.  When it’s your turn, you will likely be thankful for your family and the good meal.  Then, you’ll think of other blessings that have come your way.  But will you be thankful for the difficulties and hardships?  Will you thank God for the nasty neighbor and the guy with road rage that crossed your path the other day?  If not, you are neglecting some of your blessings.

Huh? you say. Have you lost your mind? No, the above Scripture passage commands us to give thanks to God in everything.  But how, you ask, can I give thanks in everything?  There are some things I am NOT thankful for!

It’s all a matter of perspective.  Even in our pain, God is allowing it. In the book Trustful Surrender to Divine Providence, The Secret of Peace and Happiness by Fr. Saint-Jure & St. Claude de la Colombiere, hardships are explained as things that God allows.  Even in situations that resulted from sin: if it happened, God allowed it.  The example is given of a thief that steals your wallet.  That is an unhappy situation.  You don’t feel the least bit thankful for it. Why would God allow such a thing?  To top it off, the whole ordeal is a result of sin and we know that God does not will sin.

The authors remind us that all of us have experiences in which we feel God saved us by some coincidence or amazing occurrence.  An example would be avoiding a car crash by a split second or some other situation that would have turned grave if not for a sudden or coincidental event.  At such times, we credit God and our guardian angel.  But then, what about such cases as stolen wallets.  The authors contend that God does not will sin, but He did allow you to be parted from your money.  They then pose the question:  “Why would God allow this?  And why does He allow any hardship?”  The answer is: “To bring a greater good from it.”

I am the co-author of Amazing Grace for Survivors, in which story after story recounts tragedies or harrowing situations in which people did not just get through, but survived.  Our definition of “survive” was a person who emerged triumphant; stronger and closer to God than when they began. No one willed pain and hardship, and yet, they all gave testimony to the greater good that resulted.  The very reason we decided on doing a book on survivors in the “Amazing Grace” series, was the fact that this theme of survival was dominant in all of the books.  Through the real-life experiences of others, we were witnessing over and over the truth that,  “…we know that in all things God works for the good of those who love him, who have been called according to his purpose.” (Romans 8:28).

This is not a lesson we really want to hear.  Most of us, as Christians, say we understand that we will all have crosses to carry in life, but when the moment comes and our own crosses weigh us down, our human nature cries out.  We ask, “Why, Lord, are you doing this to me?”  – often feeling betrayed. We hope and even expect that God will go easy on us.  As followers of His Son, we feel as though God should cut us some slack and not place too heavy a burden on us.

In the “Amazing Grace” book series, I often interviewed people and ghost wrote their stories for them.  I became intimately involved in their experiences to the point that we often cried together on the phone and I’d cry again and again as I wrote up their stories.  Although we had a wide variety of stories; some were entertaining and even humorous, but others were painful when they touched on the death of a loved one. Yet, through the grace of God, such stories had happy endings.

In Amazing Grace for Families, a friend of mine, Steve Cates, shared the story of the death of his son Josh from a car accident at the age of 26.  When Josh was younger, he babysat for my boys.  They loved him.  It seems everyone loved Josh.  At his funeral, people traveled from Massachusetts Institute of Technology where he had gone to school.   A letter arrived from Yemen from a family that had desperately tried to make it to the funeral.  People arrived from California where he had done an internship, and the church overflowed with teachers and friends of his from North Dakota.  He truly was a special young man.  But how does one give thanks for his death?  How can we thank God in such circumstances?

To help you to understand such thinking, here is an excerpt from the story where Steve goes to the hospital room of his son to say his last good-bye:

Tears poured down my face as I gripped his hand for the last time. “My baby boy, my beautiful baby boy,” I sobbed.  “I love you so much.”  I could not imagine a world without him.

Back in our room, we had put the mattresses on the floor so we could remain close to one another in our pain.  As the four of us talked about Josh it occurred to me that in twenty-six years of being his father, I had never once felt angry at him.  “Has anyone ever been angry at Josh?” I asked.  No one ever had.  I added up all our time lived of knowing Josh – 113 years.  “We’ve known him for 113 years and in all that time, no one was ever mad at him,” I realized.  I asked if anyone ever remembered him being unkind or ever lying or bragged.  There was never a time.

Although we all knew Josh was an incredible human being, not until that moment did we truly understand the immensity of the life he had lived. I felt the pain of losing him would overwhelm me. “Why would God do this?” I asked Cathy in anger.  “How can this be?”

Cathy’s eyes were swollen from crying. “Steve,” she said, her voice shaking.  “We can’t be angry. Think of the gift God gave us for twenty-six years. We’ve talked about all the good things about Josh.  Look at what we’ve had.”

I knew that we had instilled our love of God to Josh, but I realized then that Cathy’s gentle heart had been imparted so powerfully upon Josh.

“I need to be more like Josh,” I stammered.

Cathy’s words had touched my heart and soul.  We were blessed with Josh as we were blessed with all our children. The pain did not end, for I will always miss Josh.  I would live under a highway bridge and never have another penny for the rest of my life if I could spend just five more minutes with Josh. But there is no anger, only acceptance.

It’s easy to thank God at the end of our day for the things we enjoyed, but if we adjust our perspective, we will find blessings we never identified as such.  For instance, when I was pregnant with our eight children, getting up in the middle of the night and feeling uncomfortable or sick or needing to use the bathroom  was standard nighttime procedure.  One night, I was about to grumble to myself when a powerful inspiration overcame me.  Instead of complaining, I could be offering up this suffering for others who were not so blessed as me.  I thought of the pregnant women on the streets of India or in Guatemala; women without indoor plumbing and a clean soft bed.  Here I was complaining instead of giving thanks for my comfortable circumstances.

Imagine from God’s vantage point, all the times we complain to Him, or even just to ourselves.  I have pointed out to my kids that God sees all – everyone in the world – all at once.  So while we are complaining about some trivial thing, God sees the suffering of his poor and forgotten.  Instead of complaining, we should be thanking God and offering up our inconveniences for those who are less fortunate and for the conversion of sinners.  To suffer is not just an opportunity to strengthen our own souls, but something that can be united to the sufferings of Christ and given in love, like a prayer, for the salvation of poor, misguided sinners.

Lest we neglect some of these opportunities, I will point out an area we all experience in our lives that we can turn into a treasure. In another article, entitled “Grouchy Treasures”, I pointed out that the people that seem to darken our doorways – the difficult people in our lives – are actually blessings.  Why else did the saints seem to be attracted to nasty, unlovable people?  One reason was because they had the ability to love like Christ, but they also saw the opportunity.

Consider these Scripture passages: “For as you judge, so will you be judged, and the measure with which you measure will be measured out to you” (Luke 6:38).  And in the Beatitudes in Matthew 5:3-10 we are told, “Blessed are the merciful: for they shall obtain mercy.”

In the context of these promises, it makes sense that the saints gravitated towards those that the rest of us find difficult.  Rather than seeing someone to avoid and complain about, they saw these people as blessings.  For if we are kind and merciful to those that don’t deserve it, then God will keep His promise and show us mercy we don’t deserve.  In effect, when we are kind and forgiving and pray for those that hurt us, we are also helping ourselves.

So this year, when it’s your turn to share what you are thankful for, imagine how your list will surprise the others at the table. It will be an opportunity to share your new perspective with others and for everyone at the table to open their eyes to blessings they might have overlooked before.

May God bless us all with a Holy Thanksgiving.