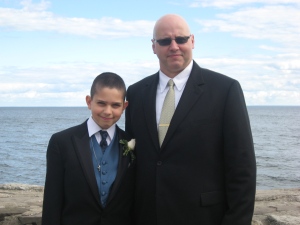 It is my great pleasure to introduce to you our newest contributing writer – Dennis Buonafede.  Dennis is an old and trusted friend and Randy and I are excited to welcome him aboard.  He joins Dr. DeMarco as our second writer hailing from Canada. He will be contributing to an ongoing series entitled, “Ideas Have Consequences” that will appear in a new Faith sub-category – Faith & Reason – and in Today’s Catholic Family.

Every parent of Catholic teenagers will want to tune in as Dennis shares his insights for handing on the faith to children in a common-sense way. I will leave it to Dennis to explain the series in a future article.  His first installment will be the lead feature on February 25th and 26th. You will not want to miss it.

As of February, 2011, Dennis Buonafede has been teaching High School Religion and Philosophy in Ontario, Canada for the past 10 years. Dennis grew up in Vancouver, British Columbia before moving to Ontario where he completed his B.A. in Philosophy at St. Peter’s Seminary at the University of Western Ontario, his M.Div. as a lay student at St. Augustine’s Seminary at the University of Toronto and his Bachelor of Education degree at the Ontario Institute for Studies in Education. Prior to transferring to St. Augustine’s, he studied at Holy Apostles Seminary in Connecticut from 1990-1992.

Dennis has been married to Teresa for 15 years and they have two children aged 12 and 14. Dennis is an active member of his parish and has been a member of the Knights of Columbus since 1995. He was a Charter Member of Council 11708 and PGK of Council 8851. He co-developed a leadership program for the KofC sponsored Ontario Catholic Youth Leadership Camp and was the camp director for 3 years. Dennis is currently a Civilian Instructor with Air Cadet 242 Squadron where his son is a Sergeant.

Dennis is a voracious reader, likes to ride motorcycles and enjoys fishing. He follows hockey (Toronto Maple Leafs), football (Chicago Bears) and NASCAR (Dale Jr.). His family agrees that he makes THE best home made pizza ever!