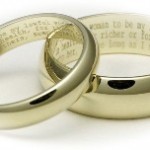 The institution of marriage, the union of one man and one woman whose love is to be so benevolent that it brings forth sons and daughters made for heaven, is sacred.  It is also a cornerstone of a healthy society.

The United States Conference of Catholic Bishops has issued a press relase today in response to news that President Obama’s administration, in response to his orders, will no longer enforce federal law under the Defense of Marriage Act, “passed by a Republican Congress and signed by a Democratic President just fifteen years ago.”

WASHINGTON (February 23, 2011) — The United States Conference of Catholic Bishops issues the following from its Office of General Counsel:

“Marriage has been understood for millennia and across cultures as the union of one man and one woman.  Today, the President has instructed the Department of Justice to stop defending the Defense of Marriage Act, a federal law reiterating that definition of marriage, passed by a Republican Congress and signed by a Democratic President just fifteen years ago.  The principal basis for today’s decision is that the President considers the law a form of impermissible sexual orientation discrimination.

“This decision represents an abdication of the responsibility of the Executive Branch to carry out its constitutional obligation to ensure that the laws of the United States are faithfully executed.  It is also a grave affront to the millions of Americans who both reject unjust discrimination and affirm the unique and inestimable value of marriage as between one man and one woman.  Support for actual marriage is not bigotry, but instead an eminently reasonable, common judgment affirming the foundational institution of civil society.  Any suggestion by the government that such a judgment represents “discrimination” is a serious threat to the religious liberty of marriage supporters nationwide.”