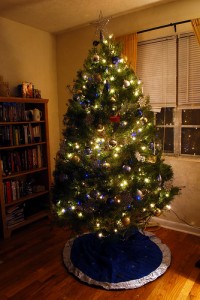 Every Christmas morning at my house, we wake up at the ridiculous hour of 5 a.m.

Every year, my sleep-deprived and bleary-eyed dad pulls himself out of bed, shushes the littler Walker kids and tells them to wait at the top of the stairs, while, every year, he says he’s just going to run downstairs ahead of us to turn on the tree and get the camera.

“Wait here and don’t come down until I say!”

“OK!!!!!!” say six little voices. The youngest ones hopping up and down but trying so hard to be quiet.

And then, when dad gets about half way down the steps …

From somewhere in the vicinity of our Christmas tree.

“Santa Claus must be here!” says Dad. “You kids wait here, I’ll go catch him and say thank you!”

And then, every year, much to the excitement of the kids on the upstairs landing, we hear Dad chase Santa Claus around the living room.

“Wait Santa Claus!” says Dad, slightly higher pitch than his normal baritone. “We just want to thank you. We have cookies! Don’t go so soon!”

At this point the bells stop rather abruptly.

For some reason the kids never ask: “Again this year, Dad? Next year your cardio training starts in October.”

If anyone dared tell my brothers and sisters that my mother was ringing those bells from a jerry-rigged system of bells and twine … they’d get the St. Nicholas-goes-after-the-Arians treatment from this oldest daughter.

In our family, Santa Claus is an integral part of our tradition-minded German-Catholic culture. My brothers and sisters and I were taught that Santa Claus is St. Nicholas, the “wonderworker,” the saintly bishop of Myrna who helped write the Nicene Creed, had a very direct approach to ecumenical dialogue, and who always had a heart for children and the poor.

Even my youngest brothers and sisters understand that Santa Claus is a friend and adorer of the Baby Jesus; that God allows Santa’s overwhelming love for the Christ Child to transcend time and space and touch every childlike heart with Christmas joy.

To us, Santa is a type of John the Baptist, announcing the coming of the Messiah. With the angels, his magical Christmas eve flight sings “Glory to God in the highest!” He’s a holy man in love with Our Lord and filled with the magic and mystery of the Nativity – a mystery a thousand times more fantastic than an old man who makes toys at the North Pole and delivers them around the world.

Santa Claus has a treasured place in the hearts and imaginations of the Walker children.

So imagine how … passionate shall we say …  I was when I recently found myself defending Santa Claus to one of my more traditional Catholic friends. He didn’t like the idea of “lying” to children. Santa distracts from Christ he said, and he just couldn’t square him with his strict interpretation of St. Thomas.

But as Catholics engaged in this battle to restore our dying culture, as pro-lifers seeking to reaffirm the dignity and infinite value of this mysterious thing we call human life, I say we desperately need Santa Claus  – the ambassador from fairyland.

In old-fashioned gratitude, we owe St. Nicholas a bit more than simply brushing him off as a superstitious lie to children or as a materialistic construct of our stuff-obsessed culture.

In this age of skepticism, scientism and string theory, we need Santa Claus more than ever. We need childlike faith and wonder on at least one magical, cold morning.

One of my favorite quotes, the one tacked to all my emails is from G.K. Chesterton, that avid defender of all things enchanted:

How can the ordinary man be sane in this utilitarian workaday world so homesick for fairyland and starved for wonder. In place of humbling awe at the supernatural or in the presence of mystery beyond our comprehending, the modern ordinary man waits for the next moment of awe from the latest in genetic engineering, the newest Google technology. Failing to recognize the infinite mysteries around him, he no longer wonders about the mysterious others in his life and instead seeks to figure them out, pigeon hole them according to cursory observations, interact as little as possible and judge by the proofs of output, career success, utility.

But for one day every year the silvery wonder of Christmas is shunned only by the most hardened atheists – poor creatures.

On that one morning, the hardened hearts of many melt and the elfin ambassador rides in with glorious news of the Messiah’s birth.

Santa Claus is real. He lived and still lives as our brother in Christ, and anyone who tells a child otherwise is guilty of a grave injustice and an offense against truth.

For one day at least out of 365, there is a crack in our cultural armor of skepticism and for that one day, this culture that has abandoned God and defiantly says to Him, “I will not believe” admits that it wants to believe.

What hope there is in that! Thank you, Santa Claus!

“There is a veil covering the unseen world which not the strongest man, nor even the united strength of all the strongest men that ever lived could tear apart. Only faith, poetry, love, romance, can push aside that curtain and view and picture the supernal beauty and glory beyond. Is it all real? Ah, Virginia, in all this world there is nothing else real and abiding.”
-Francis P. Church, “Yes Virginia, There is a Santa Claus”