How Abortion Breaks All Ten Commandments

Abortion does not only break the Fifth Commandment, “Thou shalt not kill.” It breaks all the commandments. Let’s reflect on how each Commandment illumines and strengthens our pro-life commitment. 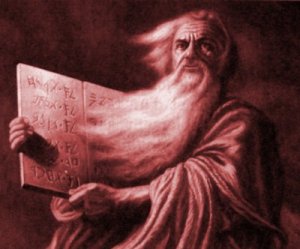 The First Commandment is “I am the Lord your God; you shall not have other gods besides me.” There are many ways of having false gods. Pope John Paul II once wrote that to think we are the ones who decide whether a child should be created is to say that God is not God. At the root of the contraceptive mentality, and at the root of the so-called “pro-choice” mentality, is idolatry. We place our choices before God’s choices. We break the first of all the commandments. In the Old Testament, we read that God’s people committed idolatry when they sacrificed their sons and daughters in the fire to demons. Until we end the child sacrifice of legal abortion, we are guilty of the same kind of idolatry.

The Second Commandment is “You shall not take the name of the Lord your God in vain.” This does not only mean that we shouldn’t use the Lord’s name in cursing when we are angry. It also means that we should not use God’s name or His Word to justify actions that he abhors.

There are religious groups and individuals in our society who do exactly that when it comes to abortion. They say they are “prayerfully pro-choice.” Groups like the “Religious Coalition for Reproductive Choice” claim that God’s word allows abortion. They hold “pro-choice” Bible studies, and they even carry out pro-choice liturgies to bless the “choice” of those who abort.

This is a distortion of God’s word and an abuse of his name. It is a direct violation of the second commandment.

The Third Commandment requires us to Keep Holy the Lord’s Day. Scripture tells us the Lord rested on the seventh day. This was not because he was tired, but rather because he was foretelling the Sabbath day that Jesus would rest in the tomb after his work of offering the sacrifice of his passion and death. On that day the Lord preached to the dead and bid them to leave the place of death and to come with him into life eternal.

The Fourth Commandment is “Honor your father and mother.” The Lord worked through our parents to bring us into being; he asked for their collaboration, for their generosity, in bringing about a plan that he had decided on from all eternity – that we should exist to love and serve him. This commandment points to the dignity of human procreation. It also points to the profound privilege and responsibility that parents have in being open to life and in being ready to protect the lives that God entrusts to their care. Those who claim a right to abortion are violating the Fourth Commandment. No parent is the owner of his or her children. God alone owns and rules human life. And he entrusts to parents the awesome gift of welcoming that life with joy.

The Fifth Commandment states, “You shall not kill.” The literal translation of this commandment forbids murder. This is not about a prohibition on killing cattle for food or on killing bugs for our safety. Nor is it an absolute prohibition on repelling an aggressor. The commandment means that we do not have authority to murder the innocent. Babies are always in that category. The commandment against directly, deliberately killing a baby or any other innocent person is absolute.

From this commandment comes the prohibition on abortion, at any stage of pregnancy and for any reason whatsoever. The commandment is based on God’s absolute dominion over human life. He alone gives and takes the lives of human beings; he alone governs who comes into the world and who goes out, and when, and how.

The Sixth Commandment says, “You shall not commit adultery.” In keeping with the understanding that commandments are like chapter headings, and that there are many other actions included under each one of them, this commandment prohibits us from abusing the gift of human sexuality and marriage — and with good reason. These gifts are given to us for our good as a human family. When we use them as God intends, they serve life. But when we abuse them, they lead to death, not just spiritually, but physically. When we speak to our nation about the tens of millions of children ripped apart by abortion, let’s challenge them to realize that one of the ways we arrived at that holocaust is that we ripped apart the very meaning and purpose of human sexuality.

The Seventh Commandment declares, “You shall not steal.” Whenever we violate the right to life, we steal. We rob the person of what is his – the recognition of his rights, the protection of his life.

Actions like abortion also rob God of what is his. Once when I was praying at an abortion facility with a group of people, and one man had his toes over the property line, a clinic worker shouted, “Get your feet off our property.” I responded, “And when are you going to get your hands off God’s property?”

God alone has dominion over human life. When an abortionist reaches into the sacred space of the womb to rip the child apart, he is stealing from the Almighty, and is also robbing society of the respect it owes to life.

The Eighth Commandment declares, “You shall not bear false witness against your neighbor.” Everyone has a right to his good name and reputation, and this commandment forbids us to lie about what someone has or hasn’t done, or about who someone is.

The culture of death violates this commandment in a profound way. By allowing court decisions like Roe vs. Wade that says, “the word person…does not include the unborn,” society bears false witness against the unborn. It is a lie.

Abortionists go even further and call our unborn brothers and sisters names like “parasites,” or “products of conception” or “medical waste.” They bear false witness.

And anyone who says an abortion is justified is bearing false witness by denying that the child has the right to be protected from the abortionists’ knife.

The Ninth and Tenth Commandments forbid us to covet what belongs to our neighbor, whether his spouse or his possessions. This commandment, in other words, requires us to limit our desires by respecting the boundaries between what is ours and what isn’t.

Some will justify it because the mother has freedom not to be burdened. But so does the child. And in denying that the child has the same freedom she claims to have, she destroys the meaning and foundation of her own.

James 2:10 states, “For whoever keeps the whole law and yet stumbles at just one point is guilty of breaking all of it.”  In many ways, abortion breaks all of the commandments.