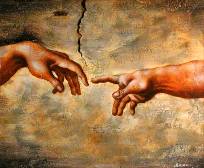 By the time a child is but a few years old he recognizes any number of different monikers to which he must answer.  Let’s take a look at fictitious Joseph James Baxter.  To his grandmother he might be “Joe-Joe” while to his friends he might be “The Big J.” His parents probably call him “Joe” unless they are upset and then it might become “Joseph James!”  If Joe’s done something really bad he quickly will become “Joseph James Baxter” while others situations that could range from being in extreme trouble to being respected by someone who doesn’t know his name might find him being called “Young Man.”  You get the idea.

My own titles, or names, have included, but again are not limited to: Sherri, Cheryl, Cheryl Ann, Young Lady, mom, mother, Mrs. Dickow, Mrs. D., and Ma’am.  With Ma’am being the only that actually makes me cringe.  Nonetheless, names have always played an important role in the history of mankind.  Many names can, and usually do, apply to one person.

Significance in names also applies to the naming of children in the bible.  And while most of us skip the paragraphs of lineage where name after name is recorded, we take notice when an essential part of the story is the selecting or giving of a name.  Consider when Gabriel announces to Zechariah, “Your wife Elizabeth will bear you a son, and you shall name him John.”  The Hebrew name for John is Yochanan which means “Yahweh is gracious.”  So in naming this baby boy “John,” people are reminded that their God, here called Yahweh, is gracious.  Friends, family, and neighbors will certainly know this to be true because both Zechariah and his wife, Elizabeth, are much older and past child-bearing years.  All will clearly know that Elizabeth and Zechariah have been blessed with this baby because of Yahweh’s graciousness.

All naming in the Old and New Testaments pales in comparison, though, to the giving of the one name at whose mention all knees shall bend: Jesus.  And while the Son, whose name is often said to be “Yeshua” in Hebrew, is given a name that means “Salvation,” it is often thought that His name can be translated “God Saves.”  Understanding the meaning found in a name is key to understanding why God, Himself, has so many titles.

For many Jews, and in particular Orthodox Jews, the name of God represented by the four letters Yud-Hay-Vav-Hay is never actually spoken.  It is considered too sacred for man to utter.  While some scholars believe that man has yet to even know the correct pronunciation of this “Tetragrammaton,” as it is often called, others, along with the Church, teach that the pronunciation was lost at the time of the destruction of the temple.  The High Priests would have known the correct pronunciation but in their understanding of its sacredness, would have only uttered it in the silence of their hearts.

This Tetragrammaton, or four letter name, is the name used when God identified Himself to Moses as “I AM WHO I AM;” thus identifying Himself as the Eternal One. Those scholars who believe man has never actually known the pronunciation believe this because it is without vowels and thus without indicators of pronunciation.  Thus, to overcome the avoidance of uttering what could be the correct pronunciation of this too-holy name (because no one is worthy to do so), or to avoid sinfully mispronouncing this too-holy name, the title Adonai is the most often used substitution for Yud-Hay-Vav-Hay.  In the Old Testament, the Tetragrammaton is found as the capitalized word “LORD.”

Most non-Jews believe that the best translation of God’s revered name is “Jehovah.”  Jehovah first appeared as a result of the 1278 A.D. work of a Spanish Monk named Raymundus Martini.

God’s many names are in the Hebrew bible, Talmud, and Jewish liturgy.  They are understood to reveal to man the different characteristics that God has shown to His people throughout their history.

Like Adonai, HaShem is a very popular name for God and means just that, “The Name.”  In Leah’s life as Jacob’s wife, HaShem  is the name of God who responds to Leah’s circumstances and blesses her with children.  We read that HaShem heard Leah’s prayers or that HaShem knew that Leah was unloved.  We also read that Leah talks of HaShem’s response to her prayers and so she names her children accordingly: Reuben, because HaShem had seen her affliction; Simeon, because HaShem had heard that she was unloved; Levi, because she hoped HaShem would join her husband to her; Judah, because she would praise HaShem.

El-Shaddai is the Almighty God who invited Abram, “Walk in my presence and be blameless.  Between you and me I will establish my covenant, and I will multiply you exceedingly.”  Using this name, which literally means “All Sufficient,” God makes it clear to Abram that whatever he is being asked to do, he will do it with the might of the one who is “all sufficient” behind him.  There will be no need to worry, there will be no need for fear.  Even in the midst of circumstances that may seem foreboding, El-Shaddai promised to be at Abram’s side.

When El-Shaddai, the Almighty God, provides Abram with a heroic rescue of Lot, it is Melchizedek who proclaims that this Almighty God is, in fact, Jehovah-Elyon.  Thus revealing another aspect of God’s character as the “Lord Most High.”  The emphasis is on most high as it was often the case that pagan nations pitted their god against an enemy god and whoever had the most powerful, or most high, god was the “winner.”  In using the name Jehovah-Elyon, there is no mistake that in these daily battles of “whose god is better,” the God that Abram serves is the Lord Most High, sovereign Creator and Ruler of the universe, bar none.

In choosing to reveal characteristics of Himself through different names at different times in the Torah, God helps illuminate His nature in a way that, although we can never fully comprehend who He is, we can better understand that He has a rightful place in every aspect of our lives; in the minutia and in the grand scheme of things.  He is our healer (Jehovah-Repheka) and the Lord of Hosts (Jehovah-Tsebaoth).  He is always there (Jehovah-Shamah) and is righteous (El-Tsaddik).  He has perfect knowledge of all things and as Christians we call Him omniscient while our Jewish roots use the name El-De’ot.  Just as we would hope, He is compassionate (El-Rachum), gracious (El-Channun), and strong (El-Sali).  And we are blessed to call Him Father.

Editor’s Note: This is an excerpt from Cheryl’s book Our Jewish Roots: A Catholic Woman’s Guide to Fulfillment Today by Connecting with Her Past.