From the Ridiculous to the Miraculous

St. Catherine of Siena said “when we are whom we are called to be, we will set the world ablaze.”  Too many of us don’t even go so far as to buy the matches to ignite a little spark let alone start a fire. We may have a deep desire or longing to make a difference but keep those desires in a box out of fear or doubt.  I often wonder what our culture would be like if more people took a risk or a leap of faith to start that project or ministry. Take Mother Angelica of EWTN for example. She says “unless we are willing to do the ridiculous, God will not do the miraculous.” 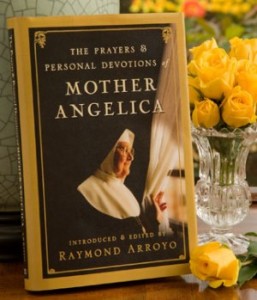 [1]I thought about these quotes as I was reading the press release announcing a major honor given to the EWTN foundress and Deacon Bill Steltemeier, the Chairman of EWTN’s Board of Governors.  This was the honor in terms of Catholic recognition coming right from the Holy Father himself.   In early October, Pope Benedict XVI awarded them the Cross of Honor for distinguished service to the Church.  The medal is officially known as “Pro Ecclesia et Pontifice” (For the Church and for the Pope.)  Who would have thought that 28 years after starting the Eternal World TV Network in the garage of a monastery that a Poor Clare nun who struggled  and struggles still with a number of health issues would be receiving such an honor; the highest honor the Holy Father can bestow upon religious and laity.

The questions and the comments from the critics came pouring in. when Mother Angelica moved from Canton, Ohio to Irondale, Alabama, smack in the middle of the Bible belt no less, to launch the network.  Didn’t she realize the obstacles before her?  Where would she get the money? Didn’t this nun realize the funds it would take in terms of the equipment and staff needed to run such an operation?  And what about Deacon Steltemeir?  What was he thinking walking away from a successful law practice to help Mother with her crazy idea?  It was utterly ridiculous or so the nay-sayers thought.

The call for Mother Angelica to set the world ablaze came at a time when catechesis in the Catholic Church, especially in the United States, was either extremely weak or, beyond the regular celebration of Mass, non-existent. As a baby boomer I remember lots of balloons, banners, and butterflies but little beef when it came to passing on Catholicism. Add to that the confusion after Vatican II, the embracing by many of radical feminism, and the so called sexual revolution.  And let’s not forget the explosion in the growth of mass media outlets. Amidst what I refer to as the perfect cultural storm Mother Angelica ignored the doubters, blew past the obstacles, and kept building the network.   Slowly but surely she won over more and more viewers doing her best to evangelize and re-catechize.  Like a good Italian Mother, she gave us lots of love along with a good spiritual kick in the pants when we needed it.  Today EWTN reaches 150 million households in more than 140 countries and territories.  The radio network has nearly 150 affiliates nation wide and is also carried on satellite radio, shortwave radio, and the Internet.

I don’t know who said it but here is another very applicable quote for you: “God doesn’t call the qualified.  He qualifies the called.”  Mother Angelica answered the call she heard from God.  She didn’t hide her light under a bushel.  She said yes and nearly 30 years later the fire for the faith is burning brightly all around the world.  Mother Angelica and Deacon Bill serve as examples of how the ridiculous can become the miraculous when we allow Jesus to work through us.  The great saint and Doctor of the Church, Catherine of Siena is no doubt very pleased.